I have been following this and I just can't belive this is happening in America. It sounds more like something from Stalinist Russia.

If someone calls me at three in the morning, there had better be a death in the family.


But this offer of "help" and "appropriate resources" is an offer you can't refuse. You see, your home is surrounded by SWAT teams from multiple jurisdictions. There are men in helmets with machine guns everywhere. Snipers are aiming at your home. You are told to come outside. You are promised you won't be arrested, handcuffed or removed from your property. You are told your possessions will not be confiscated. The friendly paramilitary troops outside your house just want to chat with you.

Any rational person would recognize the danger in refusing the orders of dozens of heavily armed cops.

You leave your home and immediately you are handcuffed at gunpoint and taken to a mental hospital for a "psychological evaluation." The police enter your home without a warrant, without permission, without probable cause and confiscate your firearms.


None of this is fiction or speculation. It happened to an Oregonian on March 8th. This is the new face of "gun control" in the age of Obama. Buy a gun, go to a mental hospital.

David Pyles of Medford Oregon purchased several firearms between March 5th and 7th. In Oregon, a firearms purchase made through a dealer requires the approval of the Oregon State Police. David received approvals for all purchases, but it was these legal purchases that the police used to justify the raid on David's home and the state-sponsored kidnapping that followed.

Shortly before David made these purchases, he had been put on "administrative leave" from his job at the Oregon Department of Transportation. He was involved in a dispute with a superior which he was attempting to resolve though normal channels and union procedures when he was told he would have to work from home.

This is not really all that uncommon. Who hasn't had a dispute with a co-worker or supervisor. I remember being fired one time because my boss asked a stupid question and I gave him a honest answer. That's the way things go sometimes. I was fired on a Friday and the next Tuesday I was back to work for a different company. For more money than I was making before.


More from the article.

His employer meanwhile posted notices warning other workers to run away if they saw David and call police. They also said David had made no threats to anyone.

David broke no law. He committed no crime and threatened no one. Yet, with no warrant and no probable cause, David was dragged off into the night by heavily armed troops with no legal authority to do so and he was given none of the protections a common thief would get from the legal system.


This is a case with nationwide implications. All gun owners, in fact all Americans should be horrified and fearful of the"Minority Report" implications of taking someone by force in the absence of any crime or even an indication that a crime was planned.

What the gun grabbers have failed to achieve legislatively, they are trying to do the old-fashioned  Soviet way. Just claim you're mentally ill and "not cooperating."

This guy used his tax refund to pick up a couple guns he wanted for his collection. Now that seems to be a problem in Oregon. They will send SWAT in the middle of the night and drag you out of your home, no crime, no warrant, no probable cause. It's good to know that the government can ignore the constitution. I hope he sues and wins big. There was absolutely no reason for what went on. This is just government out of control.

Posted by Robert Fowler at 9:40 AM No comments: Links to this post

It's almost funny how desperate some on the left are to conflate gun owners with haters—and instructive to see how filled with hate some of these "progressives" reveal themselves to be. A good example of this is the meme that the Second Amendment March is scheduled to take place on April 19 to celebrate the 15th anniversary of the Oklahoma City bombing.

Here's a sample of sentiment gleaned from around the web:


WOW, they are celebrating a terrorist attack on the US?


god, how do these gun nuts sleep at night? ...They probably think McVeigh was a hero. some certainly think Koresh is. these are the Tea Baggers among us. loons, misfits, gun nuts, paranoids, racists and traitorous cowards.


They are celebrating the deaths of innocent Americans and the terrorist who murdered them.

This is just a group of gun nuts who think they are going to stand up to the black president and show him who is boss. I am sure some Republican will get involved to make money off of this little rally. The FBI will be watching these guys like bugs under glass.

There is one other thing, there are more guns on the street than these goons can even imagine. The PD has already said they don't guarantee their safety.

To the gang leaders I would say, shoot accurately.

Ah, the voices of tolerance...


"We chose that date because it is the 235th anniversary of Lexington-Concord."

It's never been a secret—it's at the core of the rally. Look on the Second Amendment March website—right there in the banner you see this: 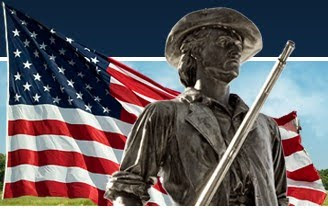 On their promotional flyers, you see this:

Gee, why the minuteman if not to commemorate the courage and conviction shown by armed citizens on April 19, 1775, otherwise known as Patriots' Day?

Be sure to read the complete article. I have seen a lot of commenters  on the Register site making the same silly claims about April 19th and McVeigh. Nothing could be further from the truth. Patriots day. Celebrating the day that the citizens stood up to tyranny and fired "the shot heard round the world".

Henry Bowman reminds us:
And to round out the list of things to celebrate on April 19th, let's not forget the glorious resistance offered to the Nazis by the ARMED Jews in the Warsaw Ghetto -- in which roughly 500 freedom fighters with an average of one gun apiece protected 300,000 of their compatriots against the mightiest army in Europe for over a month.

This is also a great cause to celebrate. The Des Moines March will also be held the 19th of April on the west side of the Capital. Since I am the state coordinator, I have decided that no serving politicians are going to speak. They are invited, but they will be audiance.

Here are the rules for the National march in DC.

1.  NO UNLAWFUL POSSESSION OF FIREARMS.
2.  If you do not intend to comply with item #1, do not attend.
3.  It is each attendee's own personal responsibility to be familiar with the firearm laws in the areas in which he/she will be traveling.
4.  Please be courteous to everyone you encounter, including D.C. police and National Park Service rangers.
5.  Please be sure to dispose of all trash.  Let's strive to leave the grounds in better condition than when we arrive.
6.  If you have any concerns while at the event, please notify a volunteer or event organizer immediately.
7.  Your attendance at Second Amendment March indicates your intent to comply with these rules/code of conduct and all local and federal laws.

Here is the mission statement of the Second Amendment March.

The mission of the Second Amendment March is to galvanize the courage and resolve of Americans; to petition our elected officials against establishing anti-gun legislation; and to remind America that the Second Amendment is necessary to maintain our right to self defense.

It is the one right that protects all others.
We will accomplish our mission by a peaceful march in Washington DC, the United States Capital, supported by satellite marches in cities all across America.
The march in D.C. will take place on Monday, April 19, 2010 on the grounds of the Washington Monument.

Come join us on the 19th. We aren't the boogie man you think we are.
Posted by Robert Fowler at 3:02 PM No comments: Links to this post

Posted by Robert Fowler at 3:31 PM No comments: Links to this post