The biggest killer in the world.


H/t to Sir Dave
Posted by Robert Fowler at 1:19 PM No comments:

Boston manhunt brought people together over desire to have a gun

Seems like a lot of the people would sure liked to have had a gun. Self defense is a basic human right, a right that some want to take away from us.

Even a lot of liberals and Democrats would have liked to had a gun.  Read the rest.

It's hard to believe that 40 years ago this next July 29th, It will be 40 years since I left the small town where I was raised and left for Marine boot camp. Sure doesn't seem that lang. 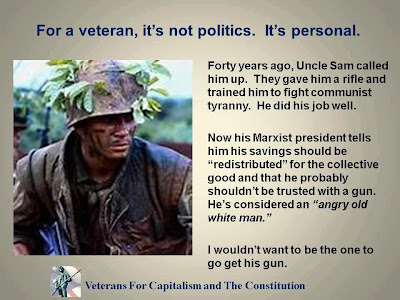 In the wake of the Boston Marathon bombings, Mayor Michael Bloomberg said Monday the country’s interpretation of the Constitution will “have to change” to allow for greater security to stave off future attacks.
“The people who are worried about privacy have a legitimate worry,” Mr. Bloomberg said during a press conference in Midtown. “But we live in a complex world where you’re going to have to have a level of security greater than you did back in the olden days, if you will. And our laws and our interpretation of the Constitution, I think, have to change.”
Where does this rich asshole get the idea that we need to change the Constitution so we can be safer? The FBI knew about the older of the 2 mad bombers*. He was even investigated for domestic violence. Yet according to Bloomberg, We need to give up our Constitutional rights.

We can't all have taxpayer funded security following us around 24 hours a day. The police, no matter the good job they try to do to prevent crime, are not obligated to protect anyone. The SCOTUS has made that point several times (Warren v. DC, Gonzales v. Castle Rock are two examples). The people responsible for your safety is YOU. The police are reactionary, they aren't going to be standing there at 2 in the morning when some thug is kicking your door in. Calling 911 is fine, get them on the phone and keep the line open. But if that thug does get in, what are you prepared to do. Between the first noise and the arrival of the PD, you need to be prepared to repel boarders.

I don't understand the mindset of these "elite" assholes that think taking away the rights of the people is going to do anything. Are they really that obsessed with power? Hell, he has his own island, he can go there and be King. He can also leave me the hell alone.


*I do not publish the names of these miscreants. The press gives them the publicity they seek.
Posted by Robert Fowler at 7:31 AM No comments:

Thanks, Angel
Posted by Robert Fowler at 10:05 AM 1 comment:

WELCOME TO THE U.S.S.A. COMRADES!

This needs to be passed on far and wide. We are approaching the end of America.

H/T to David Codrea
Posted by Robert Fowler at 9:17 AM No comments:

Oh, that's only for us lowly serfs.

H/T to Miguel.
Posted by Robert Fowler at 8:32 AM No comments: