Not under the radar now

It's been a fact for a long time that President Obama told Sarah Brady that they were working on gun control "under the radar". Well at the last debate, Obama took a climb right into the radar. The Bradyites have been saying we "need a conversation on guns" for a while now. Well, they are getting their wish.

All of the naysayers that claimed for years that Obama wasn't after our guns should be shutting up now. Of course after saying we need a "assault weapons" ban,, he segued right into the call to do away with "cheap handguns". So not only does he want our AR's and AK's, he wants to do away with the only means of defense that a lot of poor people have. Not everyone can afford a $1000 Sig or 1911. 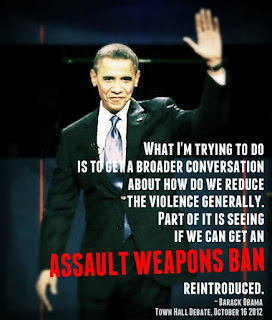 He jumped on this Bradyite bandwagon because Romney brought up Fast and Furious. There is nothing that will spoil a good debate like pointing out the criminal activity of your administration. Obama thought it might be better to be vilified for calling for a ban than to have his administration and his AG exposed as criminals. Between him and the alleged moderator, they got F&F buried pretty quick.

Of course he blamed the "cheap" handguns for the crime in Chicago. They never once think it might be the fault of the criminals. People have been killing each other ever since there have been people. If someone is intent on doing harm, they will find a way.

Obama probably has no clue what a "assault weapon" is.


"Assault Weapon" is a term made up by gun hater Josh Sugarman to scare people that don't know better."Assault weapons—just like armor-piercing bullets, machine guns, and plastic firearms—are a new topic. The weapons' menacing looks, coupled with the public's confusion over fully automatic machine guns versus semi-automatic assault weapons—anything that looks like a machine gun is assumed to be a machine gun—can only increase the chance of public support for restrictions on these weapons. In addition, few people can envision a practical use for these weapons."-Josh Sugarmann, Assault Weapons and Accessories in America, 1988

The Bradyites count on most people not knowing the difference between a civilian AR-15 and a military assault rifle like the M-16. Because they look the same they use simple misdirection.  Even though the function of the military arm is different.

It's going to be interesting to see how much of a slide Obama takes in the polls after his statement. Of course all of the panty wetting gun haters will be squirming with orgasmic delight. They say the truth will set you free. Let's set Obama free on the 6th.

The immanent death of the Brady bunch

The Brady bunch is on a new tear about having a "conversation" about guns. We already had that conversation and they lost big time. Miguel has a great piece about it Here.

The latest meme from the Anti Second Amendment crowd is “We need a conversation about guns” as implying that they are the sensitive/cordial/intelligent side willing to sit down and come to reasonable solution.


It's a great read and shows the unwillingness of the Bradyites to talk with reasoned discourse. If you go to the web sites of any of the anti's, you will find the "conversation" is rather one sided. If you speak up about gun rights, your comments will be removed and you will be banned from commenting. The Collectivists Supporting Government Violence (CSGV) are one of the worst. I follow them on facebook, yet they have banned me from commenting. So much for reasoned discourse.

Another sign they are on their way out is a look at their tax forms. It seems that for the last 3 years reported, they are in the hole;

Donations and membership is down to the point that they are running on borrowed money. I won't even get into what I think of Colin the coward. He's cashing in on being a survivor of VT. He was in one of the last room that the shooter came to, yet no one, not even Colin did a damn thing. They didn't try to block the door, they didn't throw things at the shooter to disrupt him, nothing. Colin the coward was shot in the ass while he was cowering under a desk. I don't think I would be giving talks about that.

Of course Colin comes by it honestly, His father Andrew, another gun hater of the extreme type. I have never understood how you function when you live in fear of a inanimate object. Having spent a lifetime around gun, I have never been afraid of them. I have never seen one "just go off" unless someone had their booger-hook where it shouldn't have been.