SAF is fighting back against Bloomberg and his minions 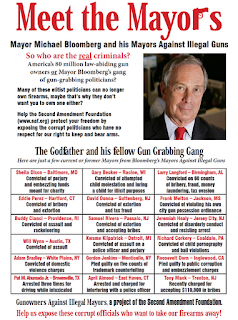 Mayors Against illegal All Guns sure has a poor track record. Back in July of 2011 we looked at the list of Mayors that were in serious trouble. There were 11 of them on our list. Well, here just 17 months later the list is up to 18.

They like to vilify gun owners and yet their own people have a higher incidence of criminal activity. If your mayor belongs to this criminal organization, write, call,e-mail, get your friends involved. Demand that they quit this bunch of criminals and leave the law abiding gun owners alone. If they expended as much energy working to reduce crime we might actually see a reduction. Of course when you belong to a criminal organization like this, I guess it's "professional courtesy".

I wrote to our own Mayor here in Des Moines over a year ago. I never did get a response. Sadly, the election in 2011 he ran unopposed. Hopefully we can find a good candidate to run against him the next time.


Posted by Robert Fowler at 8:55 AM No comments: Links to this post

Let's start with a review.

Matt Bracken is a former SEAL and one great author. Everyone should read his Enemies Trilogy. Catstigo Cay is the last novel he wrote. It's fast paced and a really great read. The hero, Dan Kilmer is a former Marine now cruising around the Caribbean on a 60ft. sailboat. It has plenty of intrigue and action. I found it hard to put down because we want to know what's going to happen next. All of his books are available on Amazon. I get the Kindle editions. There are more reviews on Amazon you can check out. I just purchased the Bracken Anthology, a collection of short stories and observations.

Frog Lube.
I got a sample of this back in the summer and decided to give it a try. To say I was impressed is understatement at it's finest. I started with my old Llama .45. It was like the slide was mounted on ball bearings. Frog Lube is a food grade lubricant, developed for the harsh environment that the SEAL's work in. It's formulated to be absorbed into the metal and build up a permanent protective coating. It's easy to apply and works the best if the metal is warm.

I took a fresh from the box AR15, stripped it, heated it in the oven and coated it inside and out with Frog Lube. We (youngest son and I) fires a couple hundred round through it and the only failure was a ammo issue. We field stripped it there and everything was still clean and shiny. I'm going to add more lube and see just how much shooting it will take before there is a non ammo failure.

I was so impressed I became a dealer. Come by the show this weekend and Check it out. It's far better that any petroleum products I have used. The part I like the best is it's not temperature sensitive. Some of the heavier gun oils will freeze up and quit if the temp gets too low.

In Sundays Register there was a letter vilifying the NRA and calling for the President to do whatever it takes to enact gun control. This guy is supposedly a retired Marine Colonel. If that's true he should be stripped of his EGA and made to turn in his man card. So much for the oath he took.


Officers Oath
I, [name], do solemnly swear (or affirm) that I will support and defend the Constitution of the United States against all enemies, foreign and domestic; that I will bear true faith and allegiance to the same; that I take this obligation freely, without any mental reservation or purpose of evasion; and that I will well and faithfully discharge the duties of the office on which I am about to enter. So help me God

I don't see anything in the officers oath that says to only defend the parts of the Constitution I like. To make matters even worse, one of the commenter's even said it would be OK to murder 4 million NRA members if that's what it took. Gee, haw about another holocaust. It's only been 70 years since the last roundup of people the government didn't like.

Go read the whole letter. Don't forget to read the comments and maybe even leave one.

Posted by Robert Fowler at 11:12 AM 2 comments: Links to this post