Go read this It's a rather telling story on one of the major malfunctions of our VA system.
Posted by Robert Fowler at 10:36 AM No comments: Links to this post

The Republican party has issued their platform on guns. It's pretty straight forward and even brings up Fast and Furious.

The Second Amendment: Our Right to Keep and Bear Arms

We uphold the right of individuals to keep and bear arms, a right which antedated the Constitution and was solemnly confirmed by the Second Amendment. We acknowledge, support, and defend the law-abiding citizen’s God-given right of self-defense. We call for the protection of such fundamental individual rights recognized in the Supreme Court’s decisions in District of Columbia v. Heller and McDonald v. Chicago affirming that right, and we recognize the individual responsibility to safely use and store firearms. This also includes the right to obtain and store ammunition without registration. We support the fundamental right to self-defense wherever a law-abiding citizen has a legal right to be, and we support federal legislation that would expand the exercise of that right by allowing those with state-issued carry permits to carry firearms in any state that issues such permits to its own residents. Gun ownership is responsible citizenship, enabling Americans to defend their homes and communities. We condemn frivolous lawsuits against gun manufacturers and oppose federal licensing or registration of law-abiding gun owners. We oppose legislation that is intended to restrict our Second Amendment rights by limiting the capacity of clips or magazines or otherwise restoring the ill-considered Clinton gun ban. We condemn the reckless actions associated with the operation known as “Fast and Furious,” conducted by the Department of Justice, which resulted in the murder of a U.S. Border Patrol Agent and others on both sides of the border. We applaud the Members of the U.S. House of Representatives in holding the current Administration’s Attorney General in contempt of Congress for his refusal to cooperate with their investigation into that debacle. We oppose the improper collection of firearms sales information in the four southern border states, which was imposed without congressional authority.

The Democrats on the other hand, would start restricting our rights early and often.

Firearms. We recognize that the individual right to bear arms is an important part of the American tradition, and we will preserve Americans’ Second Amendment right to own and use firearms. We believe that the right to own firearms is subject to reasonable regulation. We understand the terrible consequences of gun violence; it serves as a reminder that life is fragile, and our time here is limited and precious. We believe in an honest, open national conversation about firearms. We can focus on effective enforcement of existing laws, especially strengthening our background check system, and we can work together to enact commonsense improvements – like reinstating the assault weapons ban and closing the gun show loophole – so that guns do not fall into the hands of those irresponsible, law-breaking few.

Reasonable regulation = we don't want anyone but the police and military to have guns. Maybe we will "allow" you to have a single shot shotgun to hunt with.

Honest, open conversation = we aren't going to listen to a single thing you have to say.

Reinstate the assault weapons ban = we don't like scary looking guns and even though the ban did absolutely nothing to reduce crime, it will make us feel better.

Gun show loophole = we are completely against all private sales of firearms for any reason. You should have no right to sell your personal property.

They sure hit all the Bradyites talking points. Reasonable conversation, Failed AWB, gun show loophole, yep, all that's missing is killer permit holders and "illegal dealers", what ever that is. It's pretty obvious that whoever wrote their platform is a gun hating hoplophobe. Any political party that doesn't trust me to own and carry a gun will not be getting my vote. Every gun owner in the country should read both of these and vote accordingly.

In other news, Good old Diane Swinestien wants to reintroduce a new and improved AWB. At the delegates' breakfast, she said that, "Weapons of war do not belong on our streets, in our classrooms, in our schools or in our movie theatres."

Weapons of war? Did I get issued a M16 when I wasn't looking? You can bet that any AWB these liberal idiot pisswits introduce won't have the loopholes that the 94 ban had. It also won't have a sunset provision either.

And using Harvey Milk as a example? He was shot with a revolver, so called "assault weapons" weren't involved. Yet the people of Kalifornia keep re-electing her and Boxer and Pelosi.

Posted by Robert Fowler at 10:19 AM No comments: Links to this post


Found this over at the Feral Irishman's site and couldn't believe it. The taxpayers are paying for a sexchange for a convicted murderer.

According to the article, this has been going on for years.

Michelle Kosilek first sued the Department of Correction 12 years ago. Two years later, Wolf ruled that Kosilek was entitled to treatment for gender-identity disorder, but stopped short of ordering surgery. Kosilek sued again in 2005, arguing that the surgery is a medical necessity.

U.S. District Judge Mark Wolf should be ashamed of himself. He should actually be removed from the bench. Where does he get the idea that this is even a option. The guy is serving a life sentence for murdering his wife.

This is what's wrong with out Country. Prisoners are not treated like prisoners any more. Weight rooms, pool tables, TV, 3 meals and some of the best health care available. Yet our returning veterans have to fight the VA system tooth and nail to get even a little help. Yeah, there's justice in this country, just as a veteran that lives under a bridge.
Posted by Robert Fowler at 12:47 PM 2 comments: Links to this post

Bracken: When The Music Stops – How America’s Cities May Explode In Violence

A great article by author Matt Bracken on a possible future for America. I have read all of his Enemies trilogy and highly recommend them. In this article he gets into detail about what could happen in major cities if/when the system breaks.

In response to recent articles in mainstream military journals discussing the use of the U.S. Army to quell insurrections on American soil, I offer an alternate vision of the future. Instead of a small town in the South as the flash point, picture instead a score of U.S. cities in the thrall of riots greater than those experienced in Los Angeles in 1965 (Watts), multiple cities in 1968 (MLK assassination), and Los Angeles again in 1992 (Rodney King). New Yorkers can imagine the 1977 blackout looting or the 1991 Crown Heights disturbance. In fact, the proximate spark of the next round of major riots in America could be any from a long list cribbed from our history.

We have seen them all before, and we shall see them all again as history rhymes along regardless of the century or the generation of humankind nominally in control of events. But the next time we are visited by widespread, large-scale urban riots, a dangerous new escalation may be triggered by a new vulnerability: It’s estimated that the average American home has less than two weeks of food on hand. In poor minority areas, it may be much less. What if a cascading economic crisis, even a temporary one, leads to millions of EBT (electronic benefit transfer) cards flashing nothing but zeroes? Or if the government’s refusal to reimburse them causes supermarket chains to stop accepting them for payment? The government can order the supermarkets to honor the cards, but history’s verdict is clear: If suppliers are paid only with worthless scrip or blinking digits, the food will stop.


It's a bit of a read, and well worth it. Is this a future we could be looking at soon? I certainly hope not. However, I think I will live by the Boy Scout Motto, "Be Prepared".
Posted by Robert Fowler at 12:13 PM 1 comment: Links to this post

Round up the terrorists

I was over at gun free zone and this grabbed me by the throat. This is a screen shot of the Brady Campaign to Prevent Gun Violence rights and the associated comments. 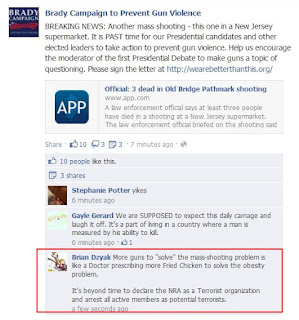 Take note of the highlighted comment. I had to read that comment twice. Brian Dzyak is a cinematographer in Hollyweird. That's according to his Bio on the IMDB web site.

He wants to round up 4 to 5 million people and lock them up as terrorists? Godwin's law should be kicking in about now. Wasn't there something in history about this happening? Oh yeah, Hitler killed 6 million Jews and a few million others. What is this asshole asking for? Holocaust part 2?

If you follow the comments on sites like this one and CSGV (Collectivists for Supreme Government Violence) this isn't that far out there. A lot of the gun haters vilify the NRA and seem to think that the members are terrorists that should be "dealt with" by the government. You can bet your ass that idiots like Brian won't be leading the charge. He'll send someones child to do his dirty work because he's a coward. The gun haters always talk a good game, but that's all they are is talk.

The simple explanation we can give these idiots is if you try to take our guns, we will kill you.


Posted by Robert Fowler at 2:30 PM 2 comments: Links to this post