The left has upped its anti-Southern rhetoric once again. Politico recently published an article that blamed the South for all the violence in America, and for impeding “progress” that would make us more like Great Britain and Canada.


Susan Glasser, the author of the article, wrote, “The United States would be much less exceptional in general, and in particular more like other English-speaking democracies such as Britain, Canada, Australia and New Zealand were it not for the effects on U.S. politics and culture of the American South.”


Really? So what does she want to do? load us on boxcars and send us tot  he camps? The ones with the "special" showers?

She didn’t stop there. Glaser continued stating, “I don’t mean this in a good way. A lot of the traits that make the United States exceptional these days are undesirable, like higher violence and less social mobility. Many of these differences can be attributed largely to the South.”

How many Southern cities looted stores over police shootings? If the South is to blame for all of America’s violence, how exactly would Glaser explain Chicago, New York City, Detroit, Baltimore, and every other major northern city full of crime?


Glaser then essentially called for the South to be cleansed by a wave of immigrants and liberals.

Yep, nothing like a little ethnic cleansing. Immigrants and liberals. Sounds like a target rich environment to me.

Read it and weep. Or laugh your ass off at the silly liberal.

Thanks to Madd Medic
Posted by Robert Fowler at 9:06 AM 4 comments:

This is beyond believable. Jailed for not having dinner with their father?  Judges are immune to recall elections. Tar and feathers are too good for this liberal asshat.
Posted by Robert Fowler at 4:48 PM No comments:

Exposed: The Dumbest Act Of Anti-Gun Outrage EVER!

This is definitely one for the YHGTBFSM files. It's sad to think that there are people out there that are this stupid.

She was going through her Sunday morning circulars, and spotted something on sale at JC Penny that outrageously outraged her. In outrageous fashion, mind you. She was so offended, she contacted the press (well, one does)…

“I just thought it was sad that a major retailers like JC Penny would want its brand associated with something that advocates, glorifies gun violence,” Richardson explained.

The T-shirt in question.

“I just thought it was sad that a major retailers like JC Penny would want its brand associated with something that advocates, glorifies gun violence,” Richardson explained.

Richardson says she is a loyal JC Penny shopper adding, “That’s why I read their ad and look for sales, but they could just give this some more attention.”
Well I would hope they would take it off the shelves, immediately.” But also says she understands young people use their clothing to express themselves, their values, but hopes if the store keeps the shirt, people will choose to wear something else.

A) It has nothing to do with guns. Clearly. She doesn’t care anyway.


B) She calls “JC Penney” a mom and pop store. Not that it’s relavent to the national firearm discussion, just pointing out that Rita is an insaneperson.

90 Miles From Tyranny : Sorry, Slate: Oregon Did Put a ‘Gag Order’ on Thos...: On Thursday, The Daily Signal published an article about Oregon Bureau of Labor and Industries (BOLI) Commissioner Brad Avakian ordering A... 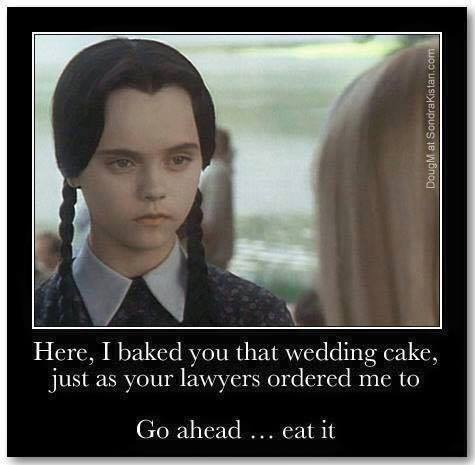 Here's a idea, if someone doesn't want to bake you a cake, go somewhere else. Too many people are looking for a reason to sue. Get over your self.

The grandsons are here this week and with other things, I could be a bit busy.

Thanks to Angel for the funny.
Posted by Robert Fowler at 9:22 AM No comments:

If I Were President

Found at Kenny's reprinted with permission.

Gov. Christie Takes Executive Action Speeding Up Government Approval to Own a Gun

Acting on his commitment to ensure a fair application of the state’s gun laws that respects individual rights to possess firearms and that also protects public safety, Governor Christie today took action to make commonsense changes to New Jersey’s gun regulations that ensure victims of domestic violence or violent crime, or those living under a direct or material threat, have their firearms applications processed quickly and without delay.

The Governor announced that the Attorney General will file a regulatory change that will ensure expedited, priority firearm application processing for victims of domestic violence, violent crimes, or those who have a demonstrable threat against them, including those who are seeking to obtain or carry firearms for self – protection.

There shouldn't be a permission slip needed to purchase a gun. I guess the liberal asshats in charge are afraid of law abiding citizens. Yet every thug and gang banger in the state can get all the guns they want.

The Governor has spoken out about the tragic murder of Carol Bowne, a Camden County resident, by her ex-boyfriend earlier this month. Bowne secured a restraining order against her ex-boyfriend and filed an application for a handgun permit in April. Less than two months later, and with her application delayed beyond the 30 – day statutory deadline for its processing, she was stabbed to death in her front yard by her ex-boyfriend.


This is what all of the bureaucratic bullshit will get you, dead, in your own yard. Carol Bowne, murdered with a assist from the state.


Under the changes proposed by the Governor today, such an application would be reviewed and processed for approval or rejection on an expedited, 14 – day basis, if possible, if either of the following circumstances exist :
Oh, you may be able to get a gun in a couple of weeks if the benevolent government says so. Of  course you have to prove to them that you are in need.
When will the people of NJ stand up and say enough. They need to vote every gun hater out of office and get some people in there that understand "shall not be infringed".

As for Crispy Creme, He wants to be President. So do I, but that ain't happening.
Posted by Robert Fowler at 7:30 AM No comments: