The Vulgar Curmudgeon: FISA And The Verizon Phone Scandal

The Vulgar Curmudgeon: FISA And The Verizon Phone Scandal

Read this and follow his links. A lot of good information about a law that this administration is abusing.
Posted by Robert Fowler at 9:57 AM No comments: Links to this post

Our own government has been waging war against the very people that keep our country free. Operation Vigilant Eagle is targeting the veterans returning from Iraq and Afghanistan and labeling them as potential terrorists.

In the words of Civil Rights lawyer John Whitehead of the Rutherford Institute,

“In the four years since the start of Operation Vigilant Eagle, the government has steadily ramped up its campaign to ‘silence’ dissidents, especially those with military backgrounds…Given the government’s increasing view of veterans as potential domestic terrorists, it makes one think twice about a new Michigan law that adds a veterans designation on Michigan driver’s licenses and state IDs.”

Why do we need out veterans status on our drivers licences? All the better to identify us to law enforcement?

In another attempt to take away the civil liberties of returning veterans, the VA has notified some returning vets that they may be submitted to competency evaluations, and pending the results, “A determination of incompetency will prohibit you from purchasing, possessing, receiving, or transporting a firearm or ammunition.”
The paranoia of the U.S. Government and the Obama Administration is the real mental illness, a kind of bureaucratic pathology that finds potential domestic terrorists beneath every military uniform. 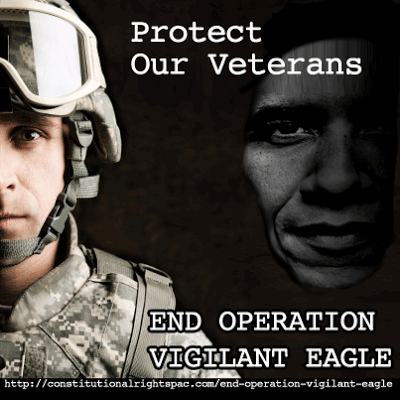 Write your congresscritters and demand that Vigilant Eagle and the war on veterans be ended.

H/T to MSGT B
Posted by Robert Fowler at 7:42 AM No comments: Links to this post