Posted by Robert Fowler at 1:21 PM No comments:

Locking up the terrorists


WE CAN ONLY SAVE OURSELVES FROM KIDNAPPERS AT THE NRA

No more due process in the clear-cut case of insidious terrorism. When the facts are so clearly before all Americans, for the whole world to see, why bother with this country’s odious and cumbersome system of justice? Send the guilty monsters directly to Guantanamo Bay for all eternity and let them rot in their own mental squalor.

No, no, no. Not the wannabe sick kid who blew up the Boston marathon or the freak that’s mailing ricin-laced letters to the president. I’m talking about the real terrorist threat here in America: the National Rifle Association.


Wow, now a statist asshat in Colorado has decided that me and nearly 5 million other NRA members should be rounded up and sent to a concentration camp. A good dose of Godwin's law can be applied here. Seems like there were some other people rounded up, oh yeah, 13 million Jew, Gypsies and other "undesirables". And that was just one Country. There has been over 100 million people rounded up and murdered by their own government in the 20th Century. Roll out the boxcars and get the "showers" ready.

The Aurora Sentinel actually printed this crap as a editorial. Of course Colorado just pass some very strict gun control laws, even though the people came out against it in vast numbers.

In the summer of 73, as a 17 year old kid, I took a oath to support and defend the Constitution of the United States. I don't recall there being a expiration date on that oath. It also covers all of the Bill of Rights, not just the ones that this statist asshat* chooses. And even though I don't agree with what he has said, he does have the right to spew his hatred.

* I refuse to use the names of terrorists, murders and collectivist America haters.

Posted by Robert Fowler at 6:39 AM No comments:

I have seen this a couple of times. It gets the same reaction every time I read it. Semper Fi.

A nurse took the tired, anxious serviceman to the bedside. “Your son is here,” she said to the old man. She had to repeat the words several times before the patient’s eyes opened.

Heavily sedated because of the pain of his heart attack, he... dimly saw the young uniformed Marine standing outside the oxygen tent. He reached out his hand. The Marine wrapped his toughened fingers around the old man’s limp ones, squeezing a message of love and encouragement.

The nurse brought a chair so that the Marine could sit beside the bed. All through the night the young Marine sat there in the poorly lighted ward, holding the old man’s hand and offering him words of love and strength. Occasionally, the nurse suggested that the Marine move away and rest awhile. He refused.

Whenever the nurse came into the ward, the Marine was oblivious of her and of the night noises of the hospital - the clanking of the oxygen tank, the laughter of the night staff members exchanging greetings, the cries and moans of the other patients. Now and then she heard him say a few gentle words. The dying man said nothing, only held tightly to his son all through the night.

Along towards dawn, the old man died. The Marine released the now lifeless hand he had been holding and went to tell the nurse. While she did what she had to do, he waited.

Finally, she returned. She started to offer words of sympathy, but the Marine interrupted her, “Who was that man?” he asked.

The nurse was startled, “He was your father,” she answered.

“Then why didn't you say something when I took you to him?”

“I knew right away there had been a mistake, but I also knew he needed his son, and his son just wasn't here. When I realized that he was too sick to tell whether or not I was his son, knowing how much he needed me, I stayed. I came here tonight to find a Mr. William Grey. His Son was killed in Iraq today, and I was sent to inform him. What was this Gentleman’s Name? “

The nurse with tears in her eyes answered, “Mr. William Grey………”

The next time someone needs you … just be there.
Posted by Robert Fowler at 10:40 AM 1 comment:

Be afraid, be very afraid

H/T to pissed
Posted by Robert Fowler at 12:59 PM No comments:

Bloomberg has no clue

Bloomberg never served in the military, so he has no clue. At 19 I was a Marine sharpshooter and in another year, I would earn the coveted wreath and crossed rifles of Expert Rifleman. 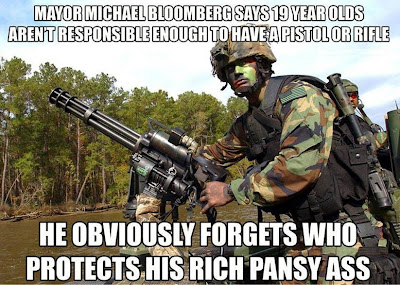 H/T to stormbringer at http://seanlinnane.blogspot.com/
Posted by Robert Fowler at 9:12 AM No comments:

Posted by Robert Fowler at 12:57 AM No comments: