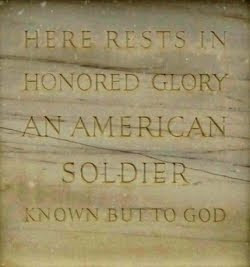 The Chaplain wore no helmet
His head was bowed in prayer
His face was seamed with sorrow
But a trace of hope was there.

Our ranks were hushed and silent
And diminished by our loss
At our feet, the the rows of crosses
Told how much the battle cost.

Rows of neat white crosses
And Stars of David too
Marked the grave sites of our brothers
Whose fighting days were through.

Friends of mine were lying there
Ski and Ace and Slim
Bo and Jack, Bill and Joe
Dusty, Tex and Jim.

Each has his simple marker
But the closest one to me
Was a plain white, wooden headboard
Marked "Unknown USMC."

In this final camp of comrades
It was somehow strange and odd
That a man should lie among them
Known only to his God.

Who can he be, I wondered?
Was he white or black or red?
This man who shares a resting place
With our loved and honored dead.

He cannot be a stranger
But a friend whose lonely track
Has brought him here among us
I think I'll call him "Mac."

"Mac" is a name we've often used
and it's been used on me
It's better than the epitaph
"Unknown USMC."

So many times I've heard it
In the blackness of the night
Through the swirling mist of combat
With the battle at it's height.

"Hey Mac", a voice would call
We could use some help out here
I've got a man that's wounded
Can you help him to the rear?

"Hey Mac" I'm really burning up
The suns so blazing hot -
Can you spare a drop of water?
"Gee, thanks Mac, thanks a lot."

The day when I was wounded
Hurt and lying in the snow
A cigarette was offered me
By a man I didn't know.

He quickly stopped the bleeding
And rolled me on my back
Grinned and gripped his rifle
And said "Take it easy Mac."

A simple word, a simple name
But still it proves to me
That no man ever really is
"Unknown USMC."

The Chaplain's prayer is finished
Our colors gently dip
The rifle squad is ready
The bugler wets his lip.

With blurry eyes and saddened heart
I heard the rifles crack
Taps floated softly in the air
And I said goodbye to "Mac."


Like every creature, President Barack Obama wants to survive his grand Presidency, the first for a minority. Yet in the wake of the hell storm that had landed upon him these past few weeks, he is more than ever a cornered animal. I expect the President to be ruthless and reckless in defeating any and all enemies.
Read the rest

Here in Des Moines, nearly the center of flyover country we are losing our F-16 fighter squadron. They are being replaced by drones. Here I sit, next to the kitchen window, looking out at the rain. Maybe it's time to close the curtains.
Posted by Robert Fowler at 7:04 AM 2 comments:

No media coverage of the Reese ordeal

David Codrea keeps us updated on the Reese family ordeal. The media has for the two years this has gone on, ignored what the government is doing to this family.


Arrested almost two years ago for allegedly knowingly selling guns to cartel members while operating a New Mexico gun store, all Reese familymembers were found not guilty on the most serious charges of conspiracy, and money laundering charges against them were dismissed. Husband Rick, wife Terri and son Ryin were convicted on a handful of lesser charges of making false statements on forms, basically under the presumption that they should have know federal agents were lying. Rick and Ryin were released on bond in February and Terri was released on bond last year. Son Remington was cleared of all charges, and a new trial for outstanding convictions has been ordered following the judge’s ruling that the prosecutor withheld evidence from the jury.

Spread the word to all of your gun owning friends and relatives. Remember, There but for the grace of God.
Posted by Robert Fowler at 12:21 PM No comments:

Best selling patriotic rock band, Madison Rising woke up this morning to hundreds of complaints from angry fans complaining that their postings of the band’s best selling rendition of the Star Spangled Banner had been deleted from Facebook over the past 24 hours.
What started as complaints from a handful of fans escalated onto a barrage of anger after the band posted a message asking if anyone else had experienced this same problem.

Here's the video that seems to have offended someone at Facebook. I have yet to hear a version that doesn't bring some moisture to the optic orifices.

Share it with all of your friends.
Posted by Robert Fowler at 8:53 AM No comments:

H/T Blue
Posted by Robert Fowler at 5:48 AM No comments:

Matt Bracken belts one over the fence

Sarah Hall Ingram was in charge of the IRS department that was harassing the Conservative groups before the last election. The price she paid for her "crime"? Promoted to the division of the IRS that is in charge of Obamacare. If you are a Tea Party member or other conservative activist, don't get sick.

Thanks to Matt Bracken.
Posted by Robert Fowler at 8:08 AM No comments: