Great article on SOPA and the government

Larry Correia is the New York Times bestselling author of the Monster Hunter International series, the Grimnoir Chronicles, and the thriller Dead Six. He has a great take on SOPA and the sorry condition we have let the country fall into.

I love this quote the best,

Amen brother.
Posted by Robert Fowler at 11:35 AM No comments: Links to this post


Time’s ‘Person of the Year’ is ‘The Protestor.’ Now, wait a minute, people. Nobody consulted me, but just for the record, my vote goes elsewhere–for US Border Patrol Agents Brian Terry and Jesus Diaz, and former Marine Sergeant and Medal of Honor recipient Dakota Meyer. Why? Because each member of this three-man team put his life on the line to protect the rule of law, to uphold, not challenge it, and he did it not once, not twice, but every day he got up and went out to do his job. I’m thinking an attaboy or two might not be out of place.


This is a little long but it goes a long way in explaining the injustices done to these fine men. Everyone should read this.
Posted by Robert Fowler at 7:57 AM 1 comment: Links to this post

Newt is no friend of gun owners.

You can go to the NAGR website and read about Newt the chameleon. Is this someone we really want to trust with our rights?

NAGR, the new kids on the block, sort of.

I just heard about this group recently. They have only been around since 2001. Their website is small but there is some good information on there.

Imagine that. The DOJ allows thousands of guns to be smuggled into Mexico and the people wanting answers are "racists". He had the audacity to say,

“This is a way to get at the president because of the way I can be identified with him,” Holder said, according to the Times. “Both due to the nature of our relationship and, you know, the fact that we’re both African-American.”

It doesn't seem to bother Obama and Holder that there are a few hundred Mexican citizens and 2 federal agents murdered with guns they supplied to the cartels.

There could possibly be a third law officer murdered by F&F guns in this case. When they trace this gun, will it go back to Holder and friends?

The scumbag was killed after he came out shooting. Deputy Coleman died at the hospital shortly after the attack. The report said he was wearing a bullet proof vest. The problem with those is the fact that they will not stop a rifle round. They are designed to stop lower velocity pistol rounds. He left a wife and 2 small children.


Mittens is a flip flopper of the worst kind. WE gun rights people call them FUDDs, as in Elmer Fudd. Elmer never used anything except a double barrel shotgun. They can also be called BUT's. their statement of I support the 2nd Amendment but.....here
And Mittens is one of the worst. while Governor of Mass. He signed one of the toughest assault weapons bans in the country. Yet he doesn't seem to know what a assault weapon is. The main feature of a assault weapon is it's capacity for SELECT FIRE. If it won't shoot full auto, it's not a assault rifle.

NEW YORK (CBSNewYork) – The NYPD is stepping up their war against illegal guns, with a new tool that could detect weapons on someone as they walk down the street.

Police, along with the U.S. Department of Defense, are researching new technology in a scanner placed on police vehicles that can detect concealed weapons.

The bad part is, some of the sheep are all for it;

“I think it’s good. People will be safer and it will be a safer environment,” Jessica Ramos said.

“If it’s going to make us safer as citizens I’m okay with that,” said Lori Sampson of Lake Ronkonkoma.

OK ladies, get a copy of the Constitution and read Amendment #4. That's the one about being secure in your papers and person. Need a warrant for searches, little things like probable cause. You are both liberal idiot pisswits.

Ben Franklin, being the smart man that he was, once said "Those that would give up liberty for safety, deserve neither. Is it any surprise that this is being cooked up in Bloomberg's paradise. A place where Donald Trump can get a permit to carry a concealed weapon but people like me can't. Bloomberg you will recall is half the brains and most of the money behind Mayors against illegal all guns. You couldn't pay me to live in that shithole. And it's only going to get worse.

One last small itm. Have some fun with friends or even people you don't like. send them this link. All in good fun.
Posted by Robert Fowler at 9:34 AM No comments: Links to this post

An Open Letter To The Anti-Gun Folks

Go read this. Trust me, you will be glad you did.
Posted by Robert Fowler at 11:10 AM No comments: Links to this post

Here's a good place to start.

BELLEVUE, WA – -(Ammoland.com)- This week’s revelation by the Centers for Disease Control and Prevention that homicide is no longer among the leading causes of death in the United States – at a time when gun ownership is at an all-time high – shows that the gun ban lobby has been wrong, the Citizens Committee for the Right to Keep and Bear Arms said today

This really makes the gun haters mad. Their mantra of more guns=more violence turns out to be a fantasy. There's perfume farting unicorns in their world.

It seems some scumbag woke the old guy up at 6 in the morning armed with a hammer and screwdriver while wearing a ski mask. The gent took his trusty .45 and shot the intruder right through the door. Hitting him and he bled out pretty quick.

The gun haters, in typical fashion, are vilifying the old guy. They start with the fact he shot through the door. OK, so? A lot of baack doors have windows in them. They weren't there so how do they know. Then they start the "what if's". Typical stuff like what if it was the paper boy, neighbor, relative etc. My neighbors come to the font door and knock. The paper boy barely steps into the yard. When relatives vist, I know they are coming.

The gun haters are trying to make the scumbag the victim. He was shot so they have blood to dance in. This is what they do. It doesn't matter that the guy had a hammer. If he had beat the old guy to death, or stabbed him with the screwdriver, oh well. Deaths other than by gunfire do not count.


In other good news.

What is it with scumbags and hammers.

39-year-old Adan Duran says the intruder first broke into his truck, took a hammer out of his own tool box and tried to break in through the garage. When he couldn't, he went to the front of the house where he was confronted by two dogs that bit him.

Duran says he attacked the dogs and kept going.

He used the hammer to break the living room window, where Duran was waiting.

He fired one round from his .357 magnum revolver in an effort to protect his four children and his wife, who were all home.

Goof for him. No charges will be filed against Duran, deputies say, in this case, it was legal for him to shoot the person who broke into his home and threatened to hurt him and his family.

And this was in anti-gun Kalifornia. The scumbag lived and since he's in Kalifornia he probably won't spend much time in prison. Kalifornia is releasing over 40,000 convicts so they can take out their aggression on the innocent people. This is what happens when the state spends much more than they take in. Here's a little more blood for the Bradyites to dance in. 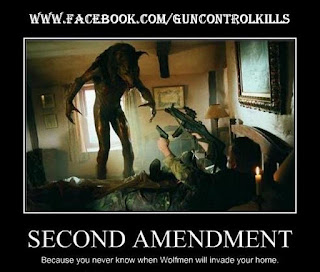 because we can
Posted by Robert Fowler at 12:56 PM No comments: Links to this post