The face of evil 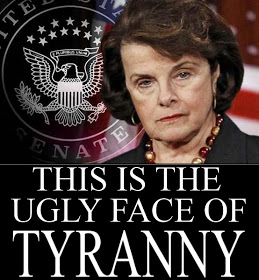 Before the election, Fineswine (D, Kommifornia) was already planning to introduce a new and improved "assault weapons" ban. One that would outlaw almost every semi-auto rifle and handgun in the country. With Obama winning the election, these gun hating asshats think they now have a "mandate" to foist their misbegotten opinions on those of us that believe in the Constitution. A bunch of the Bradyites are dancing and clapping, claiming the NRA is now irrelevant. They live in their little fairy-tale world and think that the battle is over. Nothing could be farther from the truth. We, the law abiding citizens that own those "evil assault weapons" will never stop the good fight. They have won nothing. The are falsely under the impression that their savior is going to suddenly ban the guns they don't like. Not going to happen. For one thing, the Republicans still control the house. Most of the R's and quite a few of the D's are pro gun. Any bill the haters submit is going to die in the House.

Posted by Robert Fowler at 12:42 PM No comments:

Why no report on Fast and Furious?

A review of press releases issued by the Department of Homeland Security, the latest being filed Sunday and dealing with DHS Secretary Janet Napolitano’s visit to Staten Island for a Hurricane Sandy follow-up, reveals the department is crediting itself with all kinds of activities and accomplishments except for its commitment to produce an Inspector General report onFast and Furious gunwalking independent ofthe Department of Justice report released in September. A review of the DHS OIG press releases on its website, with the latest filing also being yesterday, also does not mention such a report.

Read all of David's article. He askes the questions that a lot of us want answers to. Just how deep does this cover up go? What seems to be the hold up? They keep trying to hide the facts. Maybe they should read the SCOTUS decision US v Nixon. The coverup is worse than the crime it's self.

These are the people that are in charge of our security? We're screwed.
Posted by Robert Fowler at 10:11 AM No comments:

Wait, I Didn't Vote For That!

Give this a listen. Welcome to the next 4 years.

Posted by Robert Fowler at 1:44 PM No comments: