An Open Letter to Lt Vance of the CT State Police

This is a great letter. They have kicked a hornets nest and now they don't know what to do about it.


Posted by Robert Fowler at 2:05 PM No comments: Links to this post

Another good one from OneTruth4Life

This is where we are headed and what we can do about it.

They have a lot of great videos here
Posted by Robert Fowler at 11:08 AM No comments: Links to this post

My Daily Kona: Armed Forces get out the vote drive?

My Daily Kona: Armed Forces get out the vote drive?:  I have been busier than a 1 legged man in a butt kicking contest..........  I got this email from my Dad whom is a retired Soldier, he ha...

This needs to be passed along to every veteran you know. It's way past time for veterans to take a stand. They are always cutting our benefits and yet you never hear a word about welfare being cut.
Posted by Robert Fowler at 12:35 PM No comments: Links to this post

My Daily Kona: "If you voted for Obama because.......": It has been a while since I have published a purely political piece making disparaging comments about the head of the Obama Junta.  The SECD...

Good one.
Posted by Robert Fowler at 12:28 PM No comments: Links to this post

I am the master

Remember, He's the master and you are nothing but a mundane.

He should lead the first SWAT raid on a gun owner. And by lead, I mean he should be the first one in the door.

Here's a little light reading for the good Lt.


“Arms in the hands of individual citizens may be used at individual discretion…in private self defense.” – John Adams
“The great principle is that every man be armed….everyone who is able may have a gun.” – Patrick Henry
“A free people ought to be armed.”- George Washington
“I prefer dangerous freedom over peaceful slavery.”- Thomas Jefferson
“I ask sir, what is the militia? It is the whole people except for a few politicians.”- George Mason (father of the Bill of Rights and The Virginia Declaration of Rights)
“The ultimate authority resides in the people alone.”- James Madison
“They that give up essential liberty to purchase a little temporary safety, deserve neither liberty nor safety.” -Benjamin Franklin
“Necessity is the plea for every infringement of human freedom. It is the argument of tyrants; it is the creed of slaves.”- William Pitt
“Guard with jealous attention the public liberty. Suspect everyone who approaches that jewel. Unfortunately, nothing will preserve it but downright force. Whenever you give up that force, you are ruined…. The great object is that every man be armed. Everyone who is able might have a gun.”- Patrick Henry
"To prohibit a citizen from wearing or carrying a war arm.... is an unwarranted restriction upon the constitutional right to keep and bear arms. If cowardly and dishonorable men sometimes shoot unarmed men with army pistols or guns, THE EVIL MUST BE PREVENTED BY THE PENITENTIARY AND GALLOWS AND"NOT" BY A GENERAL DESPERATION OF CONSTITUTIONAL PRIVILEGE."--[WILSON v. STATE, 33 Ark. 557, @560, 34Am. Rep. 52,at 54 (1878)]
Posted by Robert Fowler at 10:54 AM No comments: Links to this post 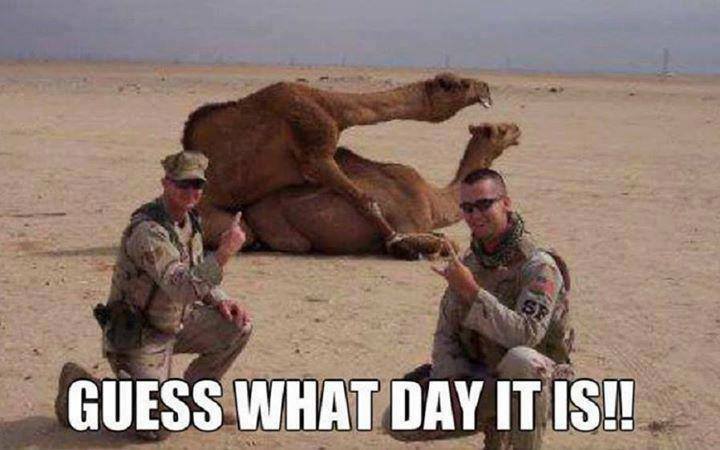 Shamelessly stolen from this guy.

Have a great hump day
Posted by Robert Fowler at 1:57 PM No comments: Links to this post

Friday, June 27th, 2014, 0-dark-thiry:  The politicians have made their decision.  By a twist of fate–your file simply happened to be on the top of the stack for no particular reason–you’ll be the first example.  A state police SWAT team pull to the curb in front of your home, leap from their van and rush to your front door.  Two black-clad men pull back a ram and swing it toward your front door, aiming just above the knob, while the rest of the team waits anxiously, their automatic weapons charged and off safe.  Two hope they’ll get the opportunity to shoot.  At least one wants to manufacture the opportunity....

Starting awake from a sound sleep by the explosion of your door being smashed open and the heavy stomping of booted feet, you stumble down the stairs and into the hallway.  As you turn toward the sounds, you’re blinded by multiple bright lights and hear many people screaming at you, but their words are unintelligible.  You raise your hands to shield your eyes, but you have your cell phone in your right hand.  As soon as it comes into view, you’re overwhelmed by a tidal wave of explosive sounds and feel the first bullets rip into your body.  There are stars, so many stars, winking and suddenly, everything goes silent and black and your last conscious thought is a feeling of falling....

Read it all and think about what it means


I've said this before and it bears repeating;
The gun owners need to get together in groups of 4 or 5. Then find out where their congress critters live and go knock on their door. Unarmed, just a friendly visit, we just stopped by to say hi. Oh and by the way, we're gun owners and we now know where you live. Fear can be a wonderful thing.
Thanks to Bob Owens

Posted by Robert Fowler at 11:26 AM No comments: Links to this post

ON SHAME, AND DISHONOR

ON SHAME, AND DISHONOR

Why is it that some people have to embellish their military service? That's something I have never done. I have exactly one medal, the National Defense Service Medal. The only other badge I have is the wreath and crossed rifles of the Marine rifle expert. Most of my time in the Marines I was a truck driver. I did spend some time in a artillery unit and I did some time as a small arms instructor. Nothing special. I was discharged after 3 years, 8 months and 12 days. I  got a general discharge under honorable conditions-medical. All because some idiot didn't know how to operate the vehicle he was driving. That was my truck accident, run down by a fool and doomed to a lifetime of pain. I did go on to work another 30 + years before I was finally forced to retire on disability. Never once in all of those years did I feel a need to enhance my service.
Posted by Robert Fowler at 1:51 PM 2 comments: Links to this post

Connecticut Carry  has issued a scathing press realease. It's well worth the read.

A recent media tidal wave based on false reports and bad journalism has proven a few things about the 2013 Gun Ban:  people from Connecticut and around the nation are tired of being threatened; are ready to make a stand; and the State of Connecticut does not have the stomach to enforce the edicts and laws with which they threaten gun owners.

Hear that GUN HATERS? We are tired of your threats. You want our guns? Lead the police and come and get them.

I really like this statement;
“From Governor Malloy, to Undersecretary Lawlor to DESPP, Commissioner Schriro, and Lieutenant Cooke of the firearms unit, and including Lt. Paul Vance, the state needs to shit, or get off the pot. The fact is, the state does not have the balls to enforce these laws. The laws would not survive the public outcry and resistance that would occur.” - Connecticut Carry Director Ed Peruta


If officials of the State of Connecticut opt to get ‘froggy’ (jumping on citizens) and start to enforce the new laws (as officials have claimed a desire to do), Connecticut Carry stands ready to do whatever it takes and whatever it can do to represent and defend anyone impacted by the State’s violence.


“As citizens of Connecticut, we have a right to bear arms. With that right comes responsibility. The responsibility to stand in defense of ourselves and our fellow citizens is paramount.” – Connecticut Carry President Rich Burgess
The gun owners need to get together in groups of 4 or 5. Then find out where their congress critters live and go knock on their door. Unarmed, just a friendly visit, we just stopped by to say hi. Oh and by the way, we're gun owners and we now know where you live. Fear can be a wonderful thing

Posted by Robert Fowler at 1:13 PM No comments: Links to this post