On a couple of other blogs I read, they were doing these maps of the states you have been in. Here's my map. The green states are ones I have lived in. The blue states are the ones where I spent quite a bit of time and the orange ones I have either been to once or passed through. You can make your own map here. 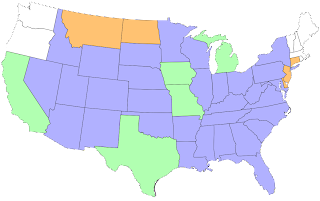 Posted by Robert Fowler at 8:37 AM No comments:

I couldn't believe this when I saw it. What a liberal idiot. Democracy didn't die. The only thing that happened was his union didn't get what they want.

Bawling over a election. What would this fool be doing if Barrett won? Cartwheels?
Posted by Robert Fowler at 9:34 AM 1 comment:

Yesterday was D-Day. The day that US and Allied forces invaded the beaches of France. The beginning of the end for the 3rd Reich. Today is the day after one of the bloodiest days in modern warfare. Ernie Pyle, the famous war correspondent, stepped on the beach and gives us a perspective of what these men went through. This is that article.

H/T to Bobbie at Roberta-x
Posted by Robert Fowler at 8:58 AM No comments:

Embarrased by the National Anthem?

This liberal idiot hates the National Anthem. He's "embarrassed" by it. Well big deal. Here's a hint Mr.Press, if you hate this Country so much, you are free to leave at any time.

I heard about this and today I found this in my inbox. There are some things that are just plain disrespectful. This is one. Memorial day is a day to remember those that have served and especially the ones that have paid the ultimate price. To shut down a place that holds special importance to some for over 7 hours for a 15 minute speech (that most vets didn't want to hear anyway)is despicable.

I just wanted a bunch of you to know about this travesty. When we were turned away from The Wall, I went to lay wreaths on my Mom and Dad and Brother and Sister's graves at Arlington. Guess what? They had that closed for the great man too!!! Not sure who his canned audiences were at either place, but not many veterans like the thousands of guys I saw going away pretty angry. Tommy DeFrank, be a voice on this, please.


John
Today as I usually do each Memorial Day and Veterans Day, I joined my fellow Soldiers I served with in Vietnam to lay a wreath for our fallen at the Vietnam Veterans Wall. We always gather at 0903 hours at the Three Soldier's Monument. There we meet for a while and talk, see how everyone is doing, if anyone needs help, introduce any new guys from out of town who are visiting, new guys who are joining us for the first time, introduce any members of our family or friends who have come with us, always followed by a few remarks about fellow members of the Blackhorse Regiment who had passed since we had last gathered and then we welcome each other home.

Today after walking across Memorial Bridge and rounding the Lincoln Memorial I saw our guys all gathering outside of a barricade around the Vietnam Veterans Memorial. When I joined them I found out to my total disbelief that we could not enter. No veterans allowed. The reason was that Obama was coming there to make a speech and the area was closed to everyone except special people with special passes until his speech was over 5 hours later. I was stunned. Thousands of Vietnam veterans gathering like us with wreaths in hand to recognize our fallen and turned away so that a politician could give a speech.

Most of us had been there when Reagan spoke, Bush 41 and 43 had spoken, even Clinton, although most of us turned our backs on him in one of the largest, silent protests ever...seen by everyone...stinging in its impact...totally unreported by the media...but even then, we were not turned away. Today we were. I saw where in a poll where Obama is over 25 points behind Romney with Vets...if they all had seen what we experienced today and knew what had transpired, the spread would be much wider. I doubt if this will even be reported in the media. But, it should.

This was not our day...it was their day...the boys who lost their lives. But it was their brothers day to come and touch their names on the Wall and remember them. It was also Decoration Day...the day we recognize those who gave all for all of us. It was not about our narcissist president and his attempt to appeal to the Vietnam Vets for votes. Shut out, we met next to a hot dog stand under a shade tree and held our semi-annual ritual for our fallen. Later that day, one of our men stayed behind and saw to it that the wreath was placed at that section of the Wall when we lost the most during the war. We won every battle in that war and were denied victory. We had to listen to an illiterate world say that we had lost our war. Our troops suffered more degradation, insult, hatred, and disgust from our countrymen than all other US troops from all wars combined. We came home to a country that didn't want us...and to many countrymen who loathed us...but yet we persevered. Today...was just one more cut...but it was a cut that will not heal any time soon.

Wayne
Posted by Robert Fowler at 9:39 AM No comments: