BILL WHITTLE: THE CASE FOR ISRAEL

Thanks to Jim Riley
Posted by Robert Fowler at 10:33 AM No comments:

Well, once again the bureaucrats at the VA have screwed me over.  It seems that whoever scheduled my last board review couldn't read simple instruction. I was examined by a PA instead  of a "real" doctor.  So the board rejected my claim and now I have to wait for them to reschedule another exam. My  lawyer says it could be anywhere from 3 to 9 months. I'm getting so fed up with the VA and all of their bullshit. They have my medical records from the Marines that shows where I was seen at the base hospital after I was hit by a truck. There are also entries where I was sent to see specialists at Camp Pendelton and the Naval hospital at San Diego. And there is my DD214 that shows I was medically discharged under honorable conditions. They also have the paperwork from the social security department that shows I am on 100% disability.
I'm pissed. So I sat down and wrote a letter to my Representative. For all the good that is going to do. I decided while I was at it, to send it to everyone in congress from Iowa. I sent the same letter to my Rep and to Senator Tom "Bahama Tommy" Harkin since they are both retiring this year.

Once again I have been denied my benefits by the VA. I have been fighting for 10 years to get what I was promised when I enlisted. While in service to the country, I was in a truck accident and received a medical discharge.

Due to the incompetence of the people in charge of the VA in Des Moines, I was remanded back to the local board (Des Moines) and now have to go through all of their hoop jumping bullshit one more time.

The Bureaucrats in charge are receiving bonuses while claims are denied and in some cases veterans are dying. The director of the Des Moines VA and whoever else can not read simple instructions needs to be fired and replaced with people that care about veterans.

So far Congress has refused to do anything except yap about the problem. People need to be fired and measures taken to get our veterans the care they need and have earned. The Social Security Admin. put me on total disability almost 10 years ago. This should tell the VA that there is a problem and 3 or 4 exams should be enough.

One of the problems with my last exam, it was conducted by a PA instead of a "real" physician. If the VA has no confidence in the word of someone that is a doctor for all practical purposes, why in the holy hell do they hire them? If they can't be trusted to make a decision on a disability claim, how can they be trusted to subscribe  courses of treatment and prescription medicine?

We have about 22 veterans a day committing suicide. Mostly because they can't get the help they need. But you can bet your ass that the people in charge are getting their paychecks and bonuses on time. The young guys and gals coming back from multiple deployments are being treated as disposable and we older vets are being ignored in the hope that we will die before they make a decision.

Do you want to know why people are starting to hate the government? Take a look at the screwed up VA system. You people sit up there in your hallowed offices and look down on the serfs. You claim to work for the people. Well fine, work for the people, show some spine. The confidence rating in Congress is at the lowest it's been in years. The reason it is, is because you people won't do your jobs.

Since you are retiring, you should not be beholden to any special interest. This should free you up to rally the troops and take on the VA. Incompetence should be meet with a trip to the unemployment office and you should be leading the charge.
You have my phone number, I will be waiting for your call


For the rest, I removed the retiring part

For Bruce Braley; I added this edit.


You are running for the Senate. Now is s good chance to show me why I should vote for you. I'm tired of hearing politicians spouting the bullshit they think people want to hear. Join with Tom Latham and lead the charge in getting the VA system fixed.


For Steve King I added;


I realize I am not in your congressional district. However, the issue at hand is important and I have already contacted Reps. Braley and Latham. I would hope you would speak with them and hopefully find a course of action. This is a non-partisan issue that affects a lot of Iowans and Veterans all over our country.

I was going to sent it to Loebsack, but he didn't have a e-mail function on his page.  I also made a couple of modifications and sent it to the pResident and the local news rag.  I've already got a response from Latham's office. They want to look into it. I don't know what they are going to do, but if they would do something to help other vets, I would consider my job here done.
I'm not expecting any of the others except Senator Grassley to even reply. I've talked to him several times about this whole VA thing and he's all for getting something done.  The liberal here in Iowa hate him, but he's like a pit-bull when he gets on something like this.

I do know that this is going to piss my lawyer off. He told me once before to quit writing to congress. He explained to me that they have to stop all work on my case to answer any correspondence from congress. I don't care any more. I hope some bureaucrat asshole gets fired over this. If they can't follow simple instructions, they need to be picking trash up along the road.
Posted by Robert Fowler at 9:50 AM 3 comments:

Posted by Robert Fowler at 5:25 AM No comments:

Days of our Trailers: Everytown for Censorship

Days of our Trailers: Everytown for Censorship: So by now many people know about the disaster of a video that the Everytown Mommies put up that even the View ridiculed.  Unsurprisingly,... 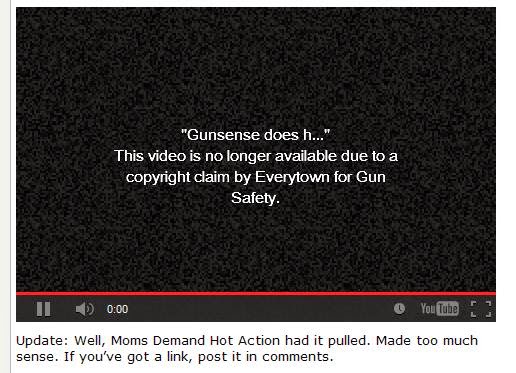 Poor Mommies Demanding Attention ( a wholly owned subsidiary of Mike (big gulp Bloomberg inc.). They produce a video that screams for arming women and now they are all butt hurt.  I hope they wasted a bunch of Bloomies money.
Posted by Robert Fowler at 1:18 PM No comments:

Where do these panty wetters get these ideas?
Posted by Robert Fowler at 12:10 PM No comments:

This is just too funny. It's also kind of sad because it's true.

And here's something to lighten things up even more.

Pro gun people couldn't have made a better video. We sure appreciate Him spending his money to help our case.

Here's what we learned from this "anti-gun" video.


1. When seconds count, the police are only minutes away. The woman in the video is on the phone with the police and is completely unable to defend herself in the seconds it takes for a violent crime to happen.
2. The only way to stop a bad guy with a gun is a good guy with a gun. Who was the woman on the phone with? The police. The police have guns. She was begging someone with a gun to come and save her, most likely by shooting the suspect (her ex). If she had a gun, she could have been that good guy with a gun.
3. Locks and security systems only keep good people out. If someone really wants to get into your home and cause harm to you and your family, they will. The only way to stop them is to physically stop them.
Thanks to Dan at Guns Save Lives
Posted by Robert Fowler at 3:50 PM 1 comment:

Chiraq, The war on guns continues.

Colion Noir gets it right about Chicago.


Posted by Robert Fowler at 8:40 AM No comments:

For Life and Freedom: Break the Rules.

For Life and Freedom: Break the Rules.

If Dr. Lee Silverman had submitted to his employer's rules, he would be dead now. And it's impossible to say how many victims' families would be grieving. The Boy Scouts didn't die at the hands of the armed bullies at the border, but the only lesson they learned was Submit and Obey.

Read it all. We lose more freedom with every unnecessary law passed. The federal code now takes just shy of 20 ft of shelf space. That's a lot of laws.
Posted by Robert Fowler at 11:42 AM 2 comments:

What Would Happen if "Battle of Athens" Round Two Ever Becomes Necessary?

What Would Happen if "Battle of Athens" Round Two Ever Becomes Necessary?

A good article about the militarization of our police departments.
Posted by Robert Fowler at 10:53 AM 4 comments: