NEVER MESS WITH THIS GIRLS PURSE

NEVER MESS WITH THIS GIRLS PURSE

She means business.
Posted by Robert Fowler at 12:44 PM No comments: Links to this post

I signed up for Square back before the last gun show of 2012 on Black Friday. 3 more gun shows (Jan. Mar. and Apr.) I used their service to take credit and debit cards. Then came the e mail about the new terms of service. Of course I didn't bother to read it, I hate all the fine print. Then one day, someone (I think it was David Codrea) had a article about square and how they were no longer allowing anything that had to do with guns and ammunition. So I went back and read the new term and there it was bigger than life, No guns, no gun parts, no ammunition or any weapons. the mew terms would take effect on June 9th.

I found PPS and started a conversation with a nice lady named Tracy. She assured me that they could set me up with someone that was 2A friendly. It took a couple of weeks and I had to send them things like bank statements and such, but they got me set up just in time for this weekend. I got a card reader for my phone and got my account set up.

It took me a  couple of e mails to cancel my Square account.

Since you no longer allow me to use your service, I want my account canceled immediately.

Their Answer;
Hello,
Thanks for writing in. To verify your identity as the account owner and confirm that you want your account to be disabled, please write back with the following information:
- The physical address you used when you signed up
- The email address associated with the account you would like disabled
I look forward to hearing back from you.
OliviaSquare Support ​

To which I received this;
Hello Robert,
Thanks for that information. Per your request, your account has been disabled.
Please let me know if you have any questions or need further assistance.
OliviaSquare Support ​

No muss, no fuss. I deleted their software out of my phone and deleted the bookmark on my laptop. I will be passing the word to everyone I see at the show this weekend.

Speaking of shows, It's time to start getting loaded so I can go get set up. Everyone have a good weekend.

Posted by Robert Fowler at 11:19 AM No comments: Links to this post

Days of our Trailers: Bloomberg Stops Terrorists: These two terrorists were just about to blow something up when Bloomie stepped in and personally stopped them:  D...


The outright audacity of the Mad Dwarf. Throwing a fit over sparklers. What's next? Book Matches?
Posted by Robert Fowler at 12:23 PM No comments: Links to this post

Go read the whole thing. It explains a lot.
Posted by Robert Fowler at 11:43 AM No comments: Links to this post

The Second Amendment Foundation today has filed a Freedom of Information Law (FOIL) request with the City of New York for all records relating to Michael Bloomberg’s Mayors Against Illegal Guns, after newspaper allegations that city resources have been used for MAIG’s gun control efforts.

I hope that if they find so much as one penny of taxpayer money used for their nefarious purposes, they demand that action be taken and Bloomy and anyone else involved are prosecuted to the fullest extent of the law. I would love to see the mad dwarf in a orange jumpsuit.
Posted by Robert Fowler at 8:40 AM No comments: Links to this post

For all the Marines past and present. 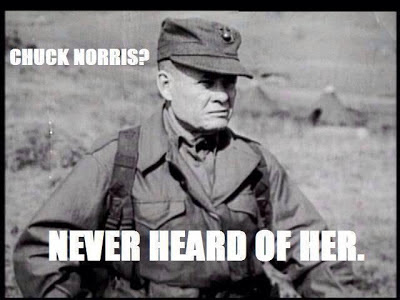 Stolen from America's Sergeant Major http://castrapraetoria1.blogspot.com/
Posted by Robert Fowler at 7:40 AM No comments: Links to this post

The Feral Irishman: The Perfect Home for Liberals...

The Feral Irishman: The Perfect Home for Liberals...

Great idea.
Posted by Robert Fowler at 2:54 PM No comments: Links to this post

Friday will be the fairgrounds gun show. Since the last show the weekend of April 12th, I've been casting bullets, scrounging primers and powder and loading ammo. For this show, I loaded over 11,000 rounds of the popular pistol calibers. That doesn't include the odd calibers and rifle ammo. It also doesn't count what I have sold to one of my good customers for his store. Hopefully, with 97 boxes of 9 mm, I won't run out before Sunday. The last 3 shows I had to work into the wee hours just to have something to put on the table.

That comes to 225 boxes that are packed and ready to load.

I didn't bother to inventory 41, 44, 45 Colt or 454. That would add another 500 or so and then there is the rifle calibers. I in the process of loading 800 223's with 55 gr Lead gas checked bullets. After this show, the next one isn't until the end of September. I think I'll take a week off and do some napping. Right after I mow the yard.

* brass for these has been a problem.

Posted by Robert Fowler at 12:01 PM No comments: Links to this post

$ years ago, while returning from my brothers, we rescued a kitten on the side of I55. She was rather beat up and week and couldn't have been over 5 or 6 weeks old. We called her roadrash because of the skinned up places. She lived and took up residence on my laptop. 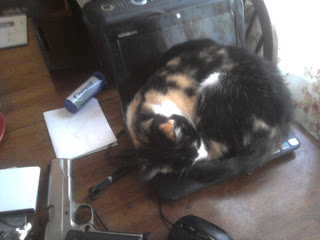 Friday at 5 PM, our former son-in-law dropped off the boys so he could go to work. We got pizza and settled in to watch a little TV. Pixie, as we finally named her, came into the living room and started turning circles. The next thing we know, we have a kitten in the floor. We knew she was pregnant, but we weren't expecting them for another week or so. I got a box and a old towel to put her in and the boys got a biology lesson. When she was done at 0200, we had three new additions. 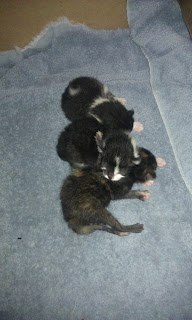 She's a good mom too. 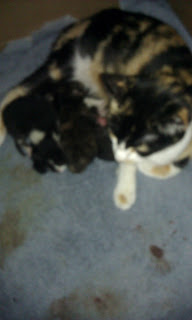 Posted by Robert Fowler at 2:27 PM No comments: Links to this post