90 Miles From Tyranny : 35 ‘ACTS OF LOVE’: Former Florida Governor Jeb Bush insisted that many of the instances of illegal immigrants coming into the U.S. were "acts of love.&...

And these fools are grooming Jeb to run for pResident.
Posted by Robert Fowler at 2:16 PM 1 comment:

The Bureau of Land Management quietly dismantled its so-called “First Amendment areas” in northeastern Clark County on Thursday, as the fight over Cliven Bundy’s cattle widened into a national debate about states’ rights and federal land-use policy.


State lawmakers from Arizona to Washington are headed for Nevada to rally alongside the Bundy family and its supporters. Most of them are tea party Republicans or Libertarians associated with a patriot group known as the Oath Keepers.

I was always under the impression that my "free speech" zone was the couple of square feet where my feet are planted. Surely I haven't been wrong all these years.

Before the federal roundup of Bundy’s livestock began, the BLM set up two orange plastic pens as rallying points for demonstrators wanting to protest the ongoing operation on federal land 80 miles northeast of Las Vegas. The move drew criticism from elected leaders and others. In a statement Tuesday, Gov. Brian Sandoval said the First Amendment areas were “offensive” and called on the agency to remove them.

So, the Governor called on the agency? How about the governor call out the National Guard and arrest the BLM thugs for trampling on the people  rights?

During a conference call with reporters Thursday afternoon, Amy Lueders, state director for the BLM in Nevada, said the agency heard the governor’s concerns and “made some adjustments” to address them.

“We are allowing people to congregate on public land as long as they don’t inhibit the operation,” she said.

Allowing? How good of you to allow the citizens of this country to exercise their rights. How about we "allow" you to populate a lamp post with a short rope.

Bunkerville resident Jim Olson lives across the street from where one of the First Amendment areas was set up. He said it reminded him of East Berlin during the Cold War, and he was glad to see a crew of BLM firefighters take it down Thursday morning.


“It took five minutes. They hooked a truck onto it, and bing, bang, boom the fence was gone,” Olson said. “Of course the publicity has just been horrid, and they (BLM officials) are not handling it very well.”

A area that should never been put up in the first place.

Thanks to Phil.
Posted by Robert Fowler at 10:31 AM No comments:

Invitation to the UN 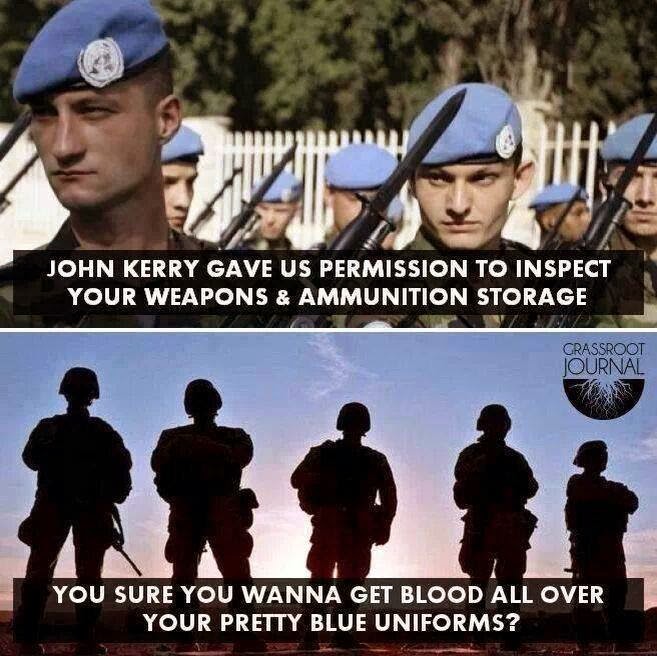 Posted by Robert Fowler at 11:30 AM No comments:

Nobody wants to take your guns, really.

The gun haters keep telling us that they don't want to ban our weapons. Maybe they can explain this. 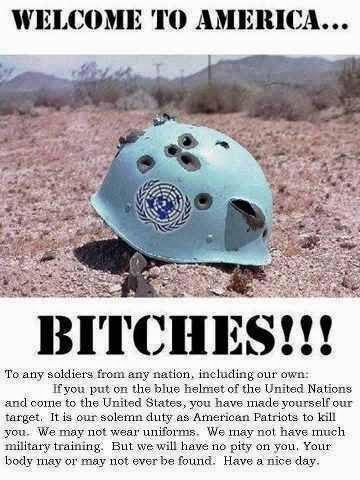 It’s one of those bizarre stories that drops the jaws of those of us jaded by years of observing the hypocrisy, the double standards, and the in-your-face breaking of rules that seemingly defines the elites of the gun-ban crowd. California State Senator Leland Yee, a leading proponent in Golden State citizen disarmament, has been arrested in a conspiracy sting involving, among other things, Islamic militants and proposed illegal arms trafficking deals.

Yesterday, the CCDL held a rally at the state capital in Hartford, Connecticut. This is David Codrea's speech.Well worth the time.

In other news. The resistance is spreading, New York estimates over 95% of gun owners will not register their weapons. Bob Owens has that story. Looks like the tyrant Cumo may have bitten off more than he can chew.


Due the the tyrannical actions of Andrew Cuomo and his allies in the state legislature,  New York residents are required to register an estimated 1 million firearms designated as “assault weapons” under the NY SAFE Act by April 15.
Unfortunately for the Governor and his allies, it appears that the open revolt of most of the state’s law enforcement leaders against NY SAFE—who correctly view the law as a blatantly unconstitutional assault on the state constitution and the Second Amendment—means that noncompliance is overwhelming.

Posted by Robert Fowler at 1:49 PM No comments:

90 Miles From Tyranny : 5 Survival Stories Too Miraculous to Be Real

90 Miles From Tyranny : 5 Survival Stories Too Miraculous to Be Real: #5. Flying a Damaged Fighter Plane While Standing on the Wing RAF World War I was a magical time when humans enjoyed their newfound mira...

Some pretty amazing stories. Well worth the few minutes it takes to read them.
Posted by Robert Fowler at 10:44 AM No comments: