…this adds an exemption of retired military. Umm, as I understand our bill, umm, no issue has arose in this regard during the 10 years the expired ban was effect, err in effect. and what we did in the other bill, was umm, exempt posession by the United States or a department or agency of the united states so that included active military. the problem with expanding this is that you know with the advent of PTSD, uhh, which I think is a new phenomenon as a product of the Iraq war, umm, it’s not clear how the seller or transferer of a firearm covered by this bill would verify that an individual was a member, or a vetran, and um that there was no impairment of that individual with respect to having a weapon like this. so you know I would be happy to sit down with you again and see if we could work something out but um, I think we have to — if you’re going to do this, find a way that veterans who are incapacitated for one reason or another mentally, uh, dont have access to this kind of weapon.

Fineswine thinks all vets are mentally disturbed and should not be allowed to own guns.

Fineswine is a evil bitch and it won't be too soon when she is out of the senate.
\
From http://westernrifleshooters.wordpress.com/
Posted by Robert Fowler at 12:59 PM 1 comment: Links to this post 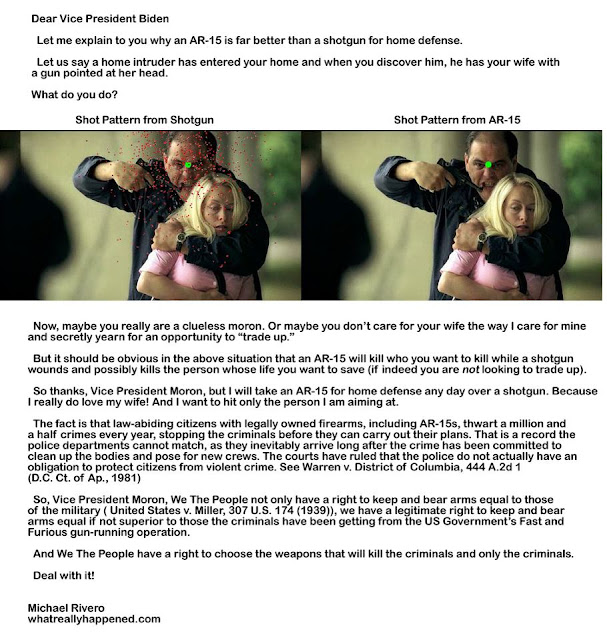 The best explanation for owning guns. Read the whole thing.

Twenty-six years ago I began my involvement with “gun rights”.  I had a good grasp on what Article II of the Bill of Rights was about then, and my thoughts haven’t changed since. Article II is about the individual’s ability to shoot tyrants – plain and simple.
It has nothing to do with hunting, collecting or competition. And tyranny, as I define it, may appear in the form of a rapist in the alley, a mob during civil unrest, an invading military, or one’s own government.
I personally own no “sporting arms.” I own and train with auto-loading, magazine fed weapons; rifles and pistols which are designed to get hot and function during conflict. Most are black and “scary looking”, and that suits me just fine – I’m not in the rainbows and unicorns business, I’m in the force business.


The liberals keep talking about hunting and "sporting" purposes. They need to read the federalist and anti-federalist papers. The founders knew exactly what they were doing.
Posted by Robert Fowler at 6:56 AM 1 comment: Links to this post

How You Can Help the Reese Family

Donate to the Reese family defense fund. They're broke. They've been broke.  They'll continue to be broke.  And the government just guaranteed their bills will do nothing but grow with its latest appeal. Share the donation link or mailing address (Reese Defense Fund, Attention Patricia Arias, First Savings Bank, 520 South Gold, Deming, NM 88030) and urge your friends to do the same.Write to the Senate Judiciary Committee and demand they do not confirm Kenneth Gonzales as a District Court Judge.  I suggest approaching Grassley as the key guy, since Democrats won't be sympathetic and since he's the Ranking member for the Republicans. Share his comm link and urge your friends to do the same.

Read it all, David has been at the fore of trying to help this family.

If you can donate, good. At least pass the links along to your friends and family.
Posted by Robert Fowler at 10:19 AM No comments: Links to this post

Here is the full document
Posted by Robert Fowler at 7:12 AM No comments: Links to this post

Surviving drone attacks in the USA

Time to dig in.
Posted by Robert Fowler at 10:44 AM No comments: Links to this post