David Codrea brings us a chance to tell our gun stories to the President's new site. Their goal is to solicit stories of gun violence where victims can tell how some criminal used a gun against them. Or they can even add some anti-gun hating rhetoric if they want.

Just in time to bolster terminology shiftingfrom supporting “gun control” to opposing “gun violence,” Barack Obama’s new “Organizing for Action” group has embraced the meme to mask its aggressive post-election citizen disarmament efforts. To help with that, they’ve invited supporters to share stories that will give the administration the appearance of widespread public support for grabbing gu …uh… enacting “common sense gun laws.”

You start out here, on the "Your stories" page, then click on the green tab that says “Tell Your Story.” That will take you to the entry form page, where they ask for your name, email address, zip code, a link to a story or photo, your story, and topic (in this case, select “Gun Violence” from the dropdown options. You also need to agree to their Ts &Cs, basically assuring them you have the rights to use what you send them and they can use it and don’t have to compensate you for it

Have fun, I know I did. I checked Iowa and my story hasn't shown up. It may not since I used a gun to save myself from a beating. Of course if some thug had used a gun to rob me, that would be posted immediately. All of the "stories" I have seen so far are from gun haters. Imagine that.

This guy needs to be President. He understands and respects the Constitution.
Posted by Robert Fowler at 9:48 AM No comments:

A warning from George Orwell


Pay attention. We are letting it happen.


Matt Braken explains Democide. Read the whole thing. It explains why we must never back down from the fight to keep our 2nd Amendment rights.  If you give up your guns, it's only a short boxcar ride to a open pit and a bullet.


Democide is the elimination of a despised group by a government. It includes genocide, politicide, and other forms of state-sponsored mass murder. The hated minority headed for extermination may be defined by religious, racial, political, class, cultural or other attributes. Between 200 and 260 million people were the victims of democide in the 20th century, several times more than were killed in international wars during that period.

Can't happen here you say? Ask George Takei (sp) of Star Trek fame. As a child he spent WWII in a internment camp. The American people stood by and watched as the American citizens were locked away just because their ancestors were from the country we were at war with. A lot of Americans of German decent were interred too.

No registration, No confiscation, No extermination.

Posted by Robert Fowler at 12:27 PM No comments:

Gun Control Is A Lie!! 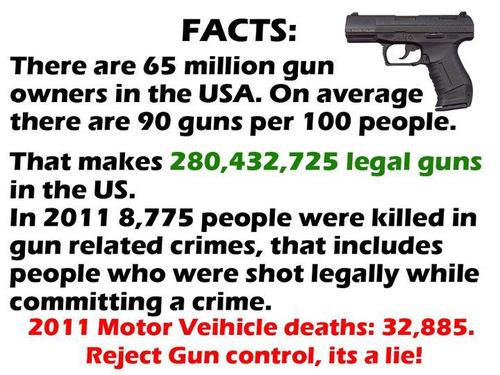 Posted by Robert Fowler at 6:43 PM No comments:

From Bracken’s “Dear Mr. Security Agent”: So What’s The Matter With Gun Registration?

Matt Bracken has a great article on registration.

In 1911, a national gun registration law was passed in Turkey, with no apparent ill intention beyond increasing public safety. In 1915, during the Great War, these gun registration lists were used to disarm the Armenian and other Christian populations. Army battalions cordoned off entire towns and did gun sweeps. Once disarmed, the official state violence visited against the Armenians ratcheted up to murderous levels. Typically, on town-wide sweeps, all of the men and boys were taken away by the Turkish soldiers, never to be seen or heard from again.


Read it all.
Posted by Robert Fowler at 1:32 PM No comments: