In this mornings paper there was a article from a carry permit holder that doesn't carry. In a recent Register article entitled Unbelievable’ Rise in Weapons Permits, it was disclosed that over 94,000 Iowans had applied for and received non-professional permits to carry weapons. He seemed to be surprised by these numbers. I was surprised too, I thought it should have been higher. Of course the December numbers should be in and we could be over 100,000.


In today's article, the writer states that he only carried a few times and decided it wasn't for him. That's his decision and I'm fine with that. I don't believe anyone that is "uncomfortable" with carrying should. That is how mistakes get made. He also tells us that his wife is very anti gun and refuses to allow a gun in the house. Now if he goes to the range to shoot, where does he keep his guns?

Also from the article we get this little gem;
I had lunch with a couple of social activist friends. As I sat down, one of them asked, “So, what I want to know is whether you’re packing!”
It's no ones business if someone is "packing". The whole point of concealed carry is the fact that no one knows.

A while back there was a Cityview article listing the names of all those with permits to carry weapons in Polk County. I was on it. Along with everyone else in Polk county that has a permit. We are going to try to get the law changed so that they cannot publish the names. He stated that his "activist" friends had seen his name in the paper.

He stress3es that people need training and I agree. You should get all of the training you possibly can. However, to demand training to exercise a Constitution right is wrong. Any responsible gun owner will seek out the best training they can.

My response to the article (below) pretty much says it all.


I too have a permit to carry. I carry every time I leave the house with very few exceptions. The main one being when I have a appointment at the VA. Because the government is afraid of honest law abiding citizens. Businesses that have no gun signs aren't a problem. If they don't want me in their store, fine. There are plenty others that will accept my money. I have trained for years in all types of firearms use and I am pretty proficient in the use of all the weapons I have trained with. I also have the resolve it takes to pull the trigger. I was a victim one time and it won't be happening again any time soon. If anyone chooses not to carry, that is their right and good for them. I however will not trade my safety for a voice on a telephone. Calling 911 is fine but remember a couple things. The police are a reactionary force. They only show up after the fact, make a report and clean up the mess. Second, the SCOTUS has ruled in many cases that the police have no duty to protect anyone. Their duty is to protect "the public at large". The chances of a cop being there when a crime is committed are more than slim, they are nonexistent. Some of us take responsibility for our own safety. I always advise anyone thinking of carrying to get as much training as they can. It's the responsible thing to do
Posted by Robert Fowler at 11:29 AM 3 comments: 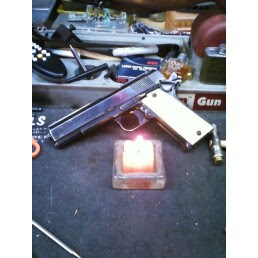 The Brady campaign to end gun vilonce Ownership is holding a candlelight vigil. Here's my candle. Along with the Llama 1A 1911 I carry every day.
Posted by Robert Fowler at 10:51 AM 2 comments: