Our Education System is run by Morons

This is a great rant on the latest stupidity in Chicago.

Thanks to Battlefield USA
Posted by Robert Fowler at 9:39 AM No comments: Links to this post

The truth about MAIG.

A former MAIG member exposes the truth. But then, we knew this. Bloomberg and his minions know they can't control us until we are disarmed.

I’m the mayor of one of the largest cities in the Hudson Valley, just 90 minutes north of New York City. I’m a life member of the National Rifle Association and a former member of Mayors Against Illegal Guns, or MAIG, started by New York Mayor Michael Bloomberg in 2006.
I’m no longer a member of MAIG. Why? Just as Ronald Reagan said of the Democratic Party, it left me. And I’m not alone: Nearly 50 pro-Second Amendment mayors have left the organization. They left for the same reason I did. MAIG became a vehicle for Bloomberg to promote his personal gun-control agenda — violating the Second Amendment rights of law-abiding citizens and taking resources away from initiatives that could actually work to protect our neighborhoods and save precious lives. […]
I like the "former" part. There are a lot of mayors in this country that need to open their eyes. They think they are doing good when the truth is, they are supporting the trampling of our rights.

It did not take long to realize that MAIG’s agenda was much more than ridding felons of illegal guns; that under the guise of helping mayors facing a crime and drug epidemic, MAIG intended to promote confiscation of guns from law-abiding citizens. I don’t believe, never have believed and never will believe that public safety is enhanced by encroaching on our right to bear arms, and I will not be a part of any organization that does.

Bravo John Tkazyik. You have taken the high road. 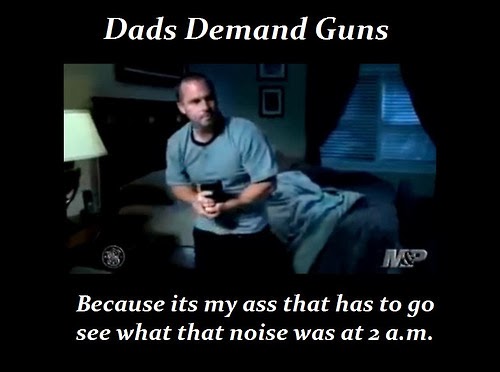 Yeah, because the response time for the police isn't any where near as fast as the turd trying to break in. I'll call 911, right after I investigate. They can come clean up the mess and write the report. The SCOTUS has ruled time and again that the police have no duty to protect anyone. Their duty is to the public at large.
Posted by Robert Fowler at 11:20 AM No comments: Links to this post

Posted by Robert Fowler at 6:35 AM No comments: Links to this post

This was in today's paper. I live here and didn't know it had happened until today.


Oh bullshit. So what if someone owns a gun. They have a carry permit, so chances are they are law abiding.


"Ross said he handed the weapon to an officer who entered the bathroom and was handcuffed as police began their search."


Why was a cooperating law abiding citizen handcuffed? Of course he's very lucky he isn't dead.


But then they can't use their terrorist tactics to intimidate the occupants. The militarization of our police departments needs to stop. If they want to be the military, join the service. You can go to someplace like Afghanistan and kick down door till your heart is content.


"As police entered the house, one officer tore out one of the security cameras Ross installed to monitor the property. He said they had cameras because he and his mother had trouble with car burglaries.
In the basement, Ross said, an officer tried to cover another camera with blankets.
He questioned why police didn't want to be taped."


They don't want any improprieties filmed to be used in court against them. Your lucky, usually the first casualty is the family dog.

One of the commentors had this to say, and my response.


" It's just too bad one of the fools inside didn't happen to be holding it when the police burst in. Then there would be one less card-stealing criminal to have to worry about in this fair city."


That would have given you a woody, guilty and executed and to hell with justice. Hows it feel to be a cop sucker?

If anyone gets the idea that I am a cop hater, I'm not. We grew up with cops drinking coffee at our table. That was a almost daily occurrence. One of those cops showed us his shiny new AR-15. That was in 67, just 3 years after the military adopted them as the full auto M16.

I was almost a cop once. I talked to the Chief in the small Texas town where I was living at the time. Medical reasons kept me from pursuing that career choice.

I've talked to some of the local cops here  in Des Moines and have found them to be friendly and helpful. When I lived in Knoxville, I hung out in the Chiefs office after I became a gun dealer. I even did some gunsmithing for one of the officers, a trigger job on his rifle.

At one time, a credit card case would have been a couple of coppers in suits knocking on the door and either talking to the occupants, or serving a search warrant without doing damage. What in the hell happened? Looks like Friday and Gannon are dead.

Posted by Robert Fowler at 11:25 AM 2 comments: Links to this post

The War on Guns: A Bizarre Twist of Fate, Indeed

The War on Guns: A Bizarre Twist of Fate, Indeed

MAIG supporter and dope fiend. What a combination.

Thanks to David C.
Posted by Robert Fowler at 3:12 PM No comments: Links to this post

Winchester has determined the above lots of 22 Long Rifle rimfire ammunition may contain double powder charges. Ammunition with double powder charges may subject the shooter or bystanders to a risk of serious personal injury and/or death, or cause firearm damage, rendering the firearm inoperable.DO NOT USE WINCHESTER® M*22™ 22 Long Rifle RIMFIRE AMMUNITION WITH LOT NUMBERS GD42L or GD52L. The ammunition Lot Number is imprinted (stamped without ink) on the left tuck flap of the 500-round carton as indicated here. The 1000-round intermediate carton does not have a Lot Number.To determine if your ammunition is subject to this notice, review the Symbol Number and Lot Number. If it is Symbol Number S22LRT with a Lot Number containing GD42L or GD52L immediately discontinue use and contact Winchester toll-free at 866-423-5224 or visit Winchester for free UPS pick-up of the recalled ammunition.Thanks to Paul for the tip.This notice applies only to Symbol Number S22LRT with Lot Numbers GD42L and GD52L. Other Symbol Numbers or Lot Numbers are not subject to this recall.If you have any questions concerning this 22 Long Rifle rimfire ammunition recall please call toll-free 866-423-5224, write to Winchester (600 Powder Mill Road, East Alton, IL 62024 Attn: S22LRT Recall), or contact Winchester Customer Support online. 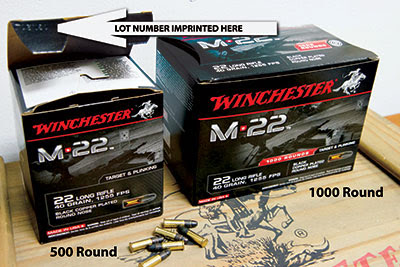 
Posted by Robert Fowler at 12:24 PM No comments: Links to this post